Iloilo was the last installment of my solo backpacking trip last year.  Iloilo is known for its gentle and "malambing" people and of course, its famous batchoy!

From Bacolod City, I took a one-hour journey aboard the Supercat going to Iloilo.  There were a lot of pedicabs, tricycles and taxis outside when I arrived at the Muelle Loney Port.  I rode a taxi going to the Iloilo Midtown Hotel paying a fixed price of Php 200!  I wanted to argue with the driver because if I was not carrying a 7-kilo backpack, I would have just walked from the port to my hotel!  My estimate is that it might have taken me 20 minutes if I walked.  But it's my fault since I didn't ask the driver before I got in the  taxi.  I paid the fare but felt as if I was robbed!

I got a Standard Room in Iloilo Midtown Hotel for Php 980 per night.  I stayed there  for two nights since I'd also be going to Guimaras.  This time I only had one bed - a matrimonial bed, the receptionist said.  And for a split second, I wished that I had someone there with me.  But hey, this is a solo backpacking trip right? I had to remind myself.

I woke up early the next day because I plan to visit as many churches as possible.  But the heavy rains kept me stuck in my hotel until 10am.  I had to order breakfast because I can't get out.  I paid Php 170 for a typical breakfast. I felt robbed again! Ano ba yan, wala pa kong napupuntahan, ubos na pera ko!
Finally after endless flipping of tv channels because of boredom, the rain stopped.  I went down to the reception and asked for directions on going to the UNESCO World Heritage site, the Miagao Church.  The receptionist told me to ride a jeepney going to Timawa and ask the driver to drop me off at Super (a wet market).  Fare is Php 7.  There I will see a terminal for jeeneys going to Miagao.  It was just a 10 minute ride from my hotel to the wet market.  Then I rode one of the jeepneys going to Miagao, fare is Php 50.  The ride going to Miagao was long, it must have been an hour or so.  I was able to pass through some of the churches on my list and decided that I will visit them after Miagao.  From Iloilo City, you will pass through the towns of  Molo, Mohon, Oton, Tigbauan and Guimbal before you arrive at Miagao.


Miagao Church or the Church of Santo Tomas de Villanueva was built in 1787 by Spanish Augustinian missionaries.  It was declared as one of the four UNESCO World Heritage Site in the Philippines listed under Baroque churches.  It has a sculpture of St. Christopher carrying the child Jesus while clinging to a large coconut tree.  There were two watch tower belfries which served as a line of defense against the Moros.

It was raining again when I arrived at Miagao.  When I got there, the church is closed!  I wanted to cry because I traveled a long way to get there plus it was raining.  I only had a shawl so I used it to cover myself and my camera while I took pictures of the church from the outside.  Naawa yata si Lord sa kin because after a few minutes, the church caretaker came out and pinapasok ako sa loob.  He asked me where I'm from and I said Laguna.  Ang layo pa pala daw ng pinangalingan ko kaya dapat makapasok ako sa loob para sulit yung pagpunta ko.  Hallelujah!


We toured inside the church.  The caretaker asked me to remove the flash on my camera.  He was the one who took the pictures inside the church.  Sabi nya he started serving in the church many years ago as an altar boy.  Now he is the caretaker and that his whole family is also serving in the church.  And as a bonus, he let me in on a small room with the statue of the Virgin Mary and Child Jesus.  He said that only a few people have been to that room.  After that we went to the adoration chapel at the back of the church.  He said that they only open the church when there is a mass and since it was Monday when I went there, it was closed.  He bid goodbye and wished me well on my trip back home. 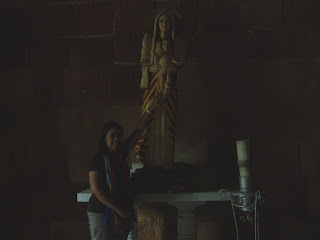 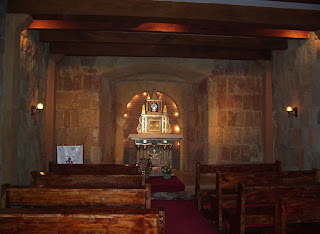 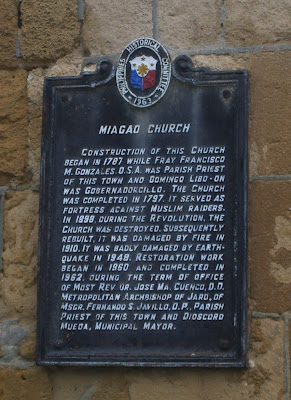 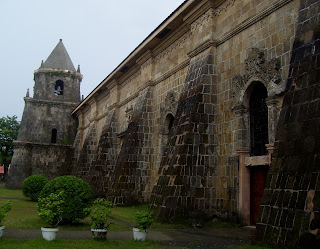 I felt kinda disappointed because I wasn't able to go to Tigbauan and Guimbal church that I passed by on the way to Miagao. It was raining very hard.


Another reason why I went to Iloilo is to try the famous batchoy. It was a perfect merienda especially on a rainy day.  Ted's and Deco's are two stores known for its batchoy.  Since I've already tasted Ted's batchoy in Manila, I went out to try Deco's version.  For Php 104, I had a bowl of steaming hot batchoy, puto (rice cake) and a glass of iced tea.  Personally, I like Ted's more because Deco's was a little bit too salty for me. 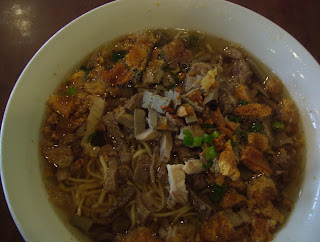 After my batchoy experience (lol), I went to SM Mandurriao (also called SM Iloilo) to have a fish foot spa.  The fish spa originated in Tibiao, Antique.  Tibiao Fish Spa has opened their second branch here in Iloilo.  It's located at the lower ground floor.  They use garra ruffa fishes which were first discovered in Turkey.  The fishes feed on callouses and dead skin cells (parang ang morbid pakinggan nun ah, haha)!  I paid Php 120 for a 30-minute service.  You have to wash your feet first before soaking it in a pool of fishes.  There were shelves available so you can leave your things there while  you're having the foot spa.  As soon as I soaked my feet in the pool, the fishes came like lions catching a prey and they nibbled on my feet.  It was ticklish at first but you'll get the hang of it after a few minutes.  Since it was my first time, the attendants let me stay in the pool for an 1 hour and they didn't charged an additional fee!  Once in lifetime experience naman 'to kaya sinulit sulit ko na (haha).  I wonder kelan kaya magkakaron ng ganito sa Manila? 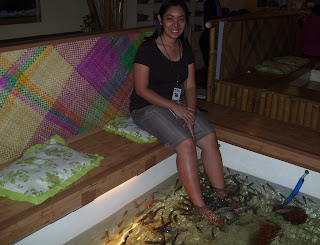 Next, I went to buy some biscocho for pasalubong.  The most famous biscocho came from Biscocho Haus which also has a branch in SM Mandurriao.  After my pasalubong and souvenir shopping, I went to Roberto's Siopao to have dinner.  Roberto's is in JM Basa St., near Muelle Loney port.  I asked for their best seller, the Queen size siopao but the store run out of it, sobrang mabili daw kasi yun.  So I bought the Jumbo siopao instead.  There were a lot of people buying from the store and they even have boxes for those buying in bulks.  Burp, burp, burp!  Dalawang siopao ba naman ang nakain ko! 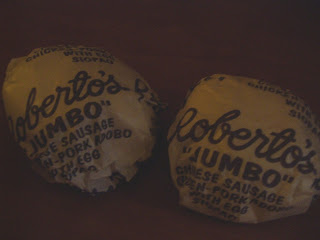 It was the last night of my solo backpacking trip.  I was proud of myself for being able to do it despite all the inhibitions I had at first.  I'm glad I pushed through because otherwise, I wouldn't be able to experience the excitement and fun of being on the road.  As I go back to Manila, I bring home with me added weight (because of too much food tripping), an almost empty pocket (sobrang nasagad budget ko) and a realization that hey I can do a solo backpacking trip naman pala!

Cheers to more backpacking trips in the future!

P.S. I'm planning to do a solo backpacking trip again this year.  Any suggestions on what places to visit?